So in a previous post I talked about an upcoming Reclamation adventure that I was going to run with a few friends. I briefly outlined the characters in that post, and last Saturday those protagonists came to life. It was quite a surreal experience for me. For starters, the group consisted of many of the people I used to play D&D with back in high school, so it was very nostalgic in a sense. Secondly, each person had an actual copy of Reclamation in hand during gameplay… and that just blew my mind.  Anyway, here is a short recap of the adventure as it played out. Keep in mind that this is the first night of an ideally ongoing campaign… so it doesn’t end with any kind of resolution… just to the point where everyone was too tired to keep up with what was going on, so we called it.

The party was ordered by the Protectorate to survey the land and report suspicious activity in the Outskirts region for 90 days. This was the 89th day and other than a few abomination sightings in the deep mist that blanketed the valley below, there had been little to report. While there was a little talk of leaving the post early, Donovan Jaedan (the disgraced battle commander in charge of this ragtag group) refused to leave the post early. Lunar Tide (the zealous Magi) was the first to suggest that in this final day of surveillance that the group venture down the valley and into the fog. He argued that it was part of the mission to discover what was going on in the fog. In truth, he had dreamed of this place… it was the reason he was here at all. In his dream a Black Cross rose up from the fog that cast a long shadow over the world, but out of the mist came a light that scattered the darkness to the four winds and brought peace. Lunar Tide believed he had been tasked by the Architect to become the Keeper of the Light, whatever that meant, and to do that, they needed to go into the fog. Nadia Federov did not wish to go, the lunatic Host scientist driven insane by her own genius. She was hearing in her head whispers (supposedly from the Progenitor) that told her the key to her next great discovery was in the fog, but the key would come to her soon enough.  Miles Richter the ousted politician had no interest in endangering his life in the fog, Aroque the redeemed murderer was ready to just follow his orders to the end, and Diego, the Daemon mutant had grown weary of his idle time in the sentry house and wanted a bit of adventure. The argument continued for some time until Diego at last used his power of ‘False Idol’ to persuade Donovan Jaedan to order the entire party to go down into the fog.

They carefully descended the steep hillside in single file… Aroque (the strongest) in front, armed with a fire extinguisher, followed by Lunar Tide holding a flashlight. The others were close behind. As they crept down the street that snaked toward the valley, the air grew colder, more biting. Voices started to emerge from the fog ahead. Nadia threw a  glow stick ahead and they saw a man clad in full plate armor struggling up the hill, a young Asian girl under his arm. Behind him several dregs grabbed at his head and legs, biting and clawing and stabbing. The group rushed forward to defend him, but as Diego tried to take the child, the man grabbed him by the throat and slammed him to the ground. He was clearly in rabid defense of the girl. They were then ambushed by a few fiends from behind. The battle raged on for several rounds, but the group eventually vanquished their enemies. However, the metal-clad warrior had sustained too many injuries and not even Lunar Tide’s magic could stabilize him. When they tried to take the child again, the strange man from the shadows pointed his blade at the party and cried, “By the Will of Elohim, state thy true purpose.” The group was confused and generally responded that they were here to get him and the girl to safety. The man said that it was too late for him but they can never let harm come to this child. Diego used his ‘Binding Pact’ mutational power to make that agreement with the warrior… stating that in exchange for protecting the girl, should he EVER come back, either in the flesh, or as a spirit, or a as a mortis-creature, he would have to serve Diego WITHOUT QUESTION (lololol). Just before the warrior died, he pulled the little girl close and whispered something. Lunar Tide was able to use his talent for Language to read his lips. He whispered, “You are the light of the world.”

They took the child back to the sentry post… the gray mist hot on their heels. It was climbing up the path faster now, the cold with it. They could hear voices, wild incoherent voices, crying out from the mist, but they were able to make it back in time. When they got back to the sentry house, they learned that the little girl’s name was Megan. She said that her whole family “went bad” and they wanted to kill her, but Gideon (the metal-clad warrior) saved her at the last minute, and they have been running ever since.  Lunar Tide and Nadia Federov took the child over to a nearby garage where Nadia was trying to get a van to work… an easier way to get back to New Phoenix once their mission was over. Diego called the Protectorate on the radio, mentioned the confrontation with the horde but said nothing about the girl. Donovan did not either when he was passed the radio. A few hours went by. Nadia kept working on the vehicle and the others debated about what to do next. No one noticed the fog reach the sentry house and wrap around them, surrounding them in fog.

Then a voice called from outside. They gazed out the window that looked over the valley. Standing before them was a plainly dressed man. He asked them if they had seen Megan, his daughter. She had been stolen from him, taken by a wild knight lost in the throes of The Sickness. He begged them for help… to reunite him with his daughter before the horde reached the top of the hill. The group was hesitant to say the least… especially considering that Megan had already said her family had been lost to The Sickness. Megan suggested to Lunar Tide that he “use the words.” So he went to the window and cried out, “By the will of Elohim… what is thy true purpose.” The man jerked his head angrily to the side and then started to laugh. “To take this child and spill her blood. She is ours… and I will take her.”

That was enough. They raced out the other side of the sentry house to make for the van, but standing before them was a hulking abomination–a 16 foot humanoid of all bulging muscle clearly deformed from the nuclear fallout.

Ugh…. I have to get ready for work.  I will describe how the session ended hopefully tonight when I get home. 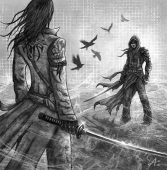 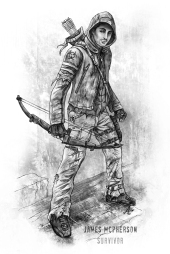 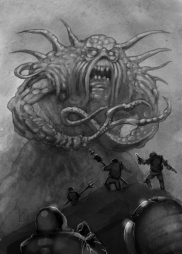 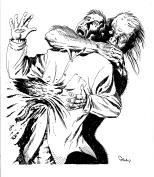 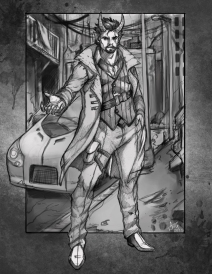 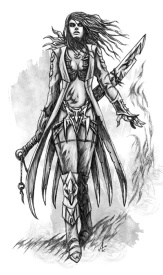 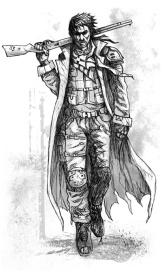 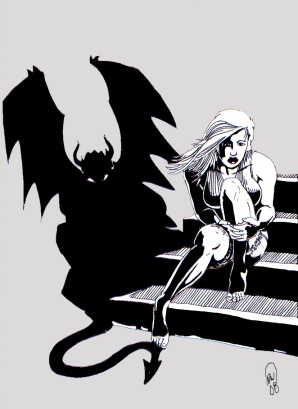 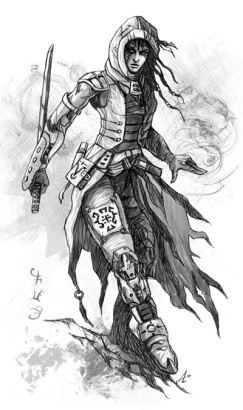 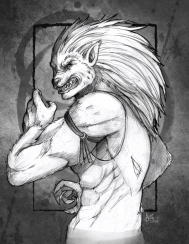 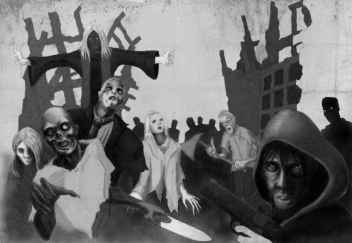 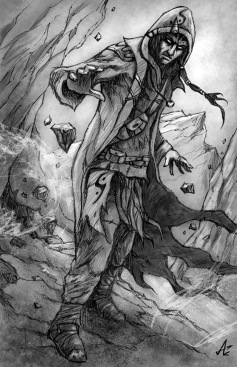 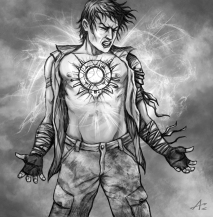 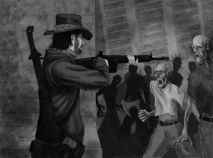 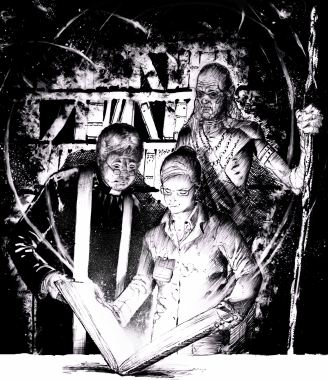 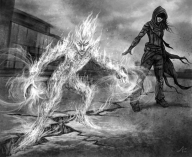 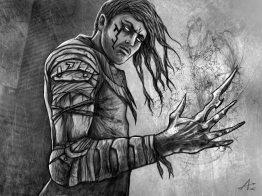 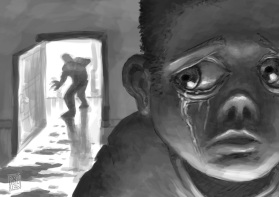 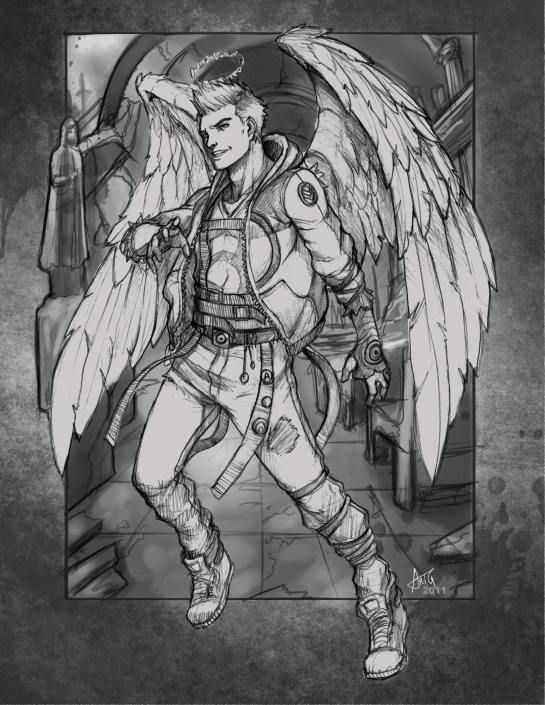